Note-for-note Guitar transcriptions with tab for all 12 songs from Sigh No More , by Mumford & Sons . Mumford & Sons exploded onto the music scene with debut album Sigh No More and haven?t looked back since: The album has been certified 3x platinum in the UK, and they won the 2011 Brit Award for Best British Album. Formed in 2007, this London-based folk/rock band, made up of Marcus Mumford, Country Winston, Ben Lovett, and Ted Dwayne, grew in popularity as a part of London’s vibrant folk renaissance. This debut album was released to high critical acclaim, particularly attracting the attention of Radio 1 DJ Zane Lowe, who named the single Little Lion Man the “Hottest Record In The World”. 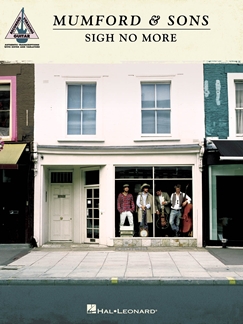