The Library of Romantic Music

Like the Baroque and Classical periods before it, Romantic music existed within a broader artistic, intellectual and literary movement. Emerging in the early 19th century it reflected a time of preoccupation with things mystical,spiritual, legendary and supernatural. Nationalism also became fashionable and, for example, Polish-born Frédéric Chopin produced many celebratory polonaises and mazurkas. Writing mainly for solo piano, Chopin latterly preferredthe more intimate atmosphere of the salon to that of the concert hall. Meanwhile Puccini and Giuseppe both established Romantic Italian opera as a particularly vibrant strand of Romantic music. 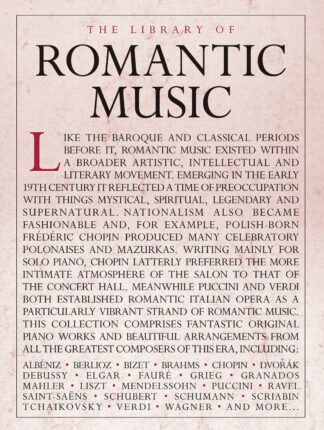 You're viewing: The Library of Romantic Music £21.50
Add to basket