The Yamaha U Series upright pianos have long been a leading choice for educational institution, professional musicians and discriminating home pianists. Now, thanks to a comprehensive redesign, these world-standard instruments are better than ever, with numerous advances in materials and construction. Refined scale designs and components improve tonal performance, while other modifications enhance strength and durability. Extra-wide music desks provide plenty of room for sheet music.

Refinements in all elements of sound production have given today’s U series a richer , more resonant voice with evenly balanced timbre across the entire keyboard.

Special lib configurations add strength to the soundboard, while back post and other advances further enhance rigidity, resonance and structural stability.

U Series hammers use materials specifically selected for each model to provide optimum tone production, response and long-term durability.

A damping mechanism, formerly used only in grand pianos, prevents the fallboard from dropping abruptly onto the keyboard, guarding against accidental injury or damage.

This section explains the optional SH2 system offered by Yamaha, you can select the “Piano System” with the product options above. The Silent System is an extension offered on all Yamaha acoustic pianos, the system does not alter the feel or sound of the traditional acoustic piano but adds additional features to the instrument listed below.

What is a SILENT Piano?

When the SILENT Piano function is activated, the hammers will no longer hit the strings and instead, a highly sophisticated sensor-technology captures all movements of the keys and sends them to the digital tone module. Play a real acoustic piano with headphones at any time, day or night without being disturbed or disturbing others. The Yamaha Silencing System is unsurpassed, allowing 24hr practice as well as possessing many other features including a range of pre-installed sounds, being able to record your own performances or connecting mobile devices to use the latest Apps.

Under each of the 88 keys is a Yamaha-unique continuous-detection grey-scale shutter key sensor. These sensors detect the movement of the keys continually, allowing natural musical expression even when the piano is in SILENT Piano function. Since they do not come into contact with the keys, these sensors do not affect the feel of the keyboard in any way.

Grand piano with SILENT Piano SH2 type are fitted with hammer sensors that allow even slow keystrokes or rapid trills. To ensure that they do not affect the feel of the keyboard in any way, Yamaha uses non-contact sensors.

Grand piano with SILENT Piano SH2 type features a quick escape system that allows the sound muting mechanism to be fitted to a grand piano without sacrificing any of the playability or musical expression demanded of such instruments in an acoustic performance. This system allows optimal separation to be obtained between the hammers and strings by adjusting the distance between the hammers and strings, ensuring that the feel of the keyboard stays in the best possible condition whether playing acoustically or with the sound muted.

Yamaha’s advanced binaural sampling technology uses samples from the CFX, Yamaha’s acclaimed concert grand piano, recorded with specialized microphones that capture locational information and other nuances discerned by the human ear. The resulting sound is so natural, so enveloping, that you’ll soon forget you’re even wearing headphones at all.

In a grand piano, sound resonates throughout the body of the instrument, producing a rich reverberation that envelops the listener in sound. This phenomena is reproduced perfectly through enhanced Virtual Resonance Modeling (VRM). The original VRM calculates the various states of the strings for each of the 88 notes on the keyboard, from one instant to the next, and timing and depth of damper pedals pressed. The enhanced VRM now also calculates aliquot resonance in the upper octaves, and the full resonance of the soundboard, rim, and frame. This technology allows for vivid, bright, richly-varied expression that reflects the limitless number of factors inherent in piano performance. 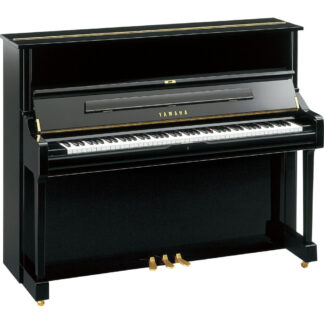