Wah Wah’s, Flangers, Phasers & Delays!! The world of guitar effects is confusing to say the least, full of complicated and sometimes humorous names to describe sounds that you can easily imagine but find difficult to describe or articulate . Which is why I’ve written a series of articles on effects and their use, starting with this one: a Beginners guide to “Time” based effect types. 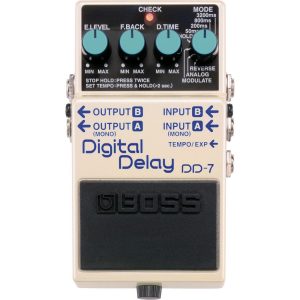 “The Boss DD-7 Is  A Classic Delay Pedal”

Delay and Reverb pedals are some of the easiest pedals to imagine and visualise and prove to be some of the most popular pedal types on the market today. Reverbs are extremely common and are often built into amps as standard (although guitarists love to add a reverb or two on their boards to give a greater breadth of tonal versatility) reverb essentially adds a greater feeling of space to your guitar sound, as if your playing in a hall or at a stadium.

Delay on the other hand is similar to that of an echo, allowing your sound to be rebounded back to you, creating a huge sense of distance and space that is hard to replicate by any other means. Both delay and reverb are highly atmospheric and when combined together artistically can create otherworldly tones that are totally unique.

Famous examples of Delay: “Welcome to the Jungle” – Guns & Roses, “Where the Streets Have No Name” – U2 & “Walking on the Moon” – The Police.

Our Stock of Reverbs & Delays. 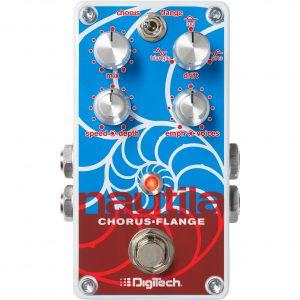 These three have rather eccentric names but are very distinctive in tone, Chorus adds a thickness/fullness to your guitars tone and is a stunning effect to use (if tasteful) and can easily make a clean sound incredibly beautiful and 80’s inspired (chorus was all the rage in the 1980’s). A Flanger is a more intense version of a chorus which has an ever so slightly larger manipulation of the tones phase which results in a dramatic yet iconic tone and is often described by many as “whooshing”. Phasers are very similar to flangers in many respects but have a more cutting and higher frequency tone (often described as wavy), and can be dialled in to be more subtle and light than chorus and flanger, perfect for funk and soul guitar tones.

Famous Examples of Chorus: “Message in a Bottle” – The Police,  ”Purple Rain” – Prince and “Come as you Are” – Nirvana.

Our Stock of Chorus, Phaser & Flanger