A Charm Of Lullabies Op.41

?A Charm of Lullabies? came about like this? In 1947, when we had staged ?The Rape of Lucretia? in Holland, Nancy was asked to return there for a series of recitals in January, 1948. Britten heard about this and asked if she would like him to write some songs for the recital programme. The idea of setting a group of lullabies was, of course, his ? but I helped in the search for poems sufficiently contrasted in mood and style to keep the audience interested and alert. That necessity largely accounts for the fact that several of the poets are unfamiliar. The Elizabethan Robert Greene, for instance, a contemporary of Shakespeare, who was said to have died ?from a surfeit of Rhenishwine and pickled herrings?, Thomas Randolph, a Jacobean poet who died when he was 30, or John Philip, a minor Elizabethan playwright. His play ?Patient Griselda?, published in 1565, disappeared until 1907, when one single copy came to light in Lord Mostyn?s library and was reprinted by the Malone Society.The title ?A Charm of Lullabies? was my suggestion, not only because the group of songs included Thomas Randolph?s ?A Charm?, but because ?Charm? is the collective noun for a flight of goldfinches, being derived from the Latin word for song or incantation: ?carmen?.Eric CrozierThe edition is part of the ABRSM syllabus (grade 7,8) 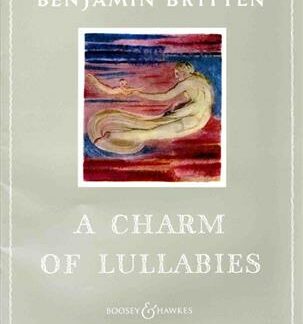