In Stock - Delivered from Warehouse

The combination has been developed to complement VERSUM SOLO A- and D-strings and is another asset to the twin-set system introduced in 2017.

VERSUM SOLO G- and C-strings embody an as yet unrivalled synthesis of explosive dynamics and graceful flexibility with the best possible response. Their solid, deep core tone is surprising with its brilliant and vivid note. Their modulation capability is just as exceptional: whether soft and sweet piano, valiant fortissimo passages or simply the earthy response – the sky’s the limit for the player.

The sound effect of the bow response can also be fully customized: whether soft, hard or sharp, from Baroque to modern, VERSUM SOLO G- and C-strings offer the highest level of possible tones and variations.

Combined with VERSUM SOLO A- and D-strings, the descant strings sound even livelier and more dynamic. At the same time, they support an exquisite sound with vocal quality. 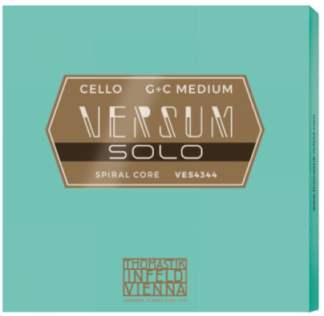