Choosing the right guitar strings for you can sometimes prove to be an impossible task among a never ending sea of brands and competition, every type of material, gauge and coating is thrown at you but is it all a marketing ploy? Or is there something in the hype of crazy formulas or string innovation? Read on and find out.

Ah the subject gauge, many a guitarist has had fierce debates in guitar stores across the world over gauge and it all comes down to the great payoff of Play-ability VS. Sound. Essentially the thicker the string (gauge) the stronger the signal is fed into in the instruments pickups (or sound hole) and the “bigger” or “fatter” the sound but with great power comes great responsibility as with this increased string thickness comes greater tension and thus difficulty to play. Extreme famous examples of the great gauge debate include Stevie Ray Vaughn who used an eye watering 13 gauge set compared to ZZ Tops own Billy Gibbons who only uses 7’s but still gets a fab tone. Gauge is very subjective and despite my own personal experience and ideas on the subject (the thicker the better for me, but saying that I’m entering the process of trimming down) you should always use whichever gauge feels the most natural yet sounds as good or rich as you need.

Strings are THE most purchased guitar related item and accessory currently on the market today, and its stands to reason that there would be a multitude of string brands fighting hard with each other to earn your well earned cash, but is there really a difference between them?

The short answer is yes!

There is indeed a huge amount of difference between string makes, both in terms of feel and sound. I can’t really be objective in this as I do have a preferred string brand by quite a large margin but I will do my best to write a fair overview. 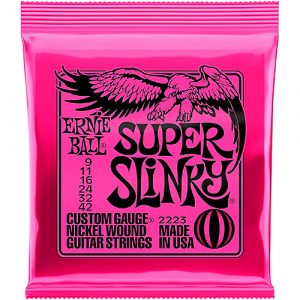 Ernie Ball are the most common strings available and due to a fantastic combination of A* marketing and accessibility they have become a monolith in the industry and are arguably the most popular string maker. What sets Ernie’s part from the competition is their eye popping gauge colours and iconic eagle mascot and a string feel that is incredibly easy to play (or “slinky”) under the fingers. The only negative aspect of Ernie’s as far as I can tell is their longevity as they are not known for lasting long and that they are prone to snapping over time (especially on the thinner gauges) this of course is counterpointed by their cheaper price but it can sometimes be extremely frustrating to snap a string while practicing let alone a live performance or session. 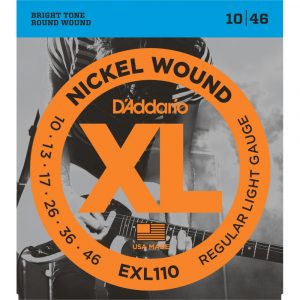 D’Addario are often regarded as the second place string manufacturer in terms of widespread popularity but the quality of their strings are anything but runner-up. The consistency and quality of D’Addario is superb and they tend to be at the cutting edge of string ingenuity and design, a recent breakthrough hit was the NYXL range of near unbreakable and long lasting strings that really set the string world ablaze and forced competitors to create similar string styles. D’Addario’s on the whole tend to be a little more tense to play than their Ernie rivals but to some that feeling is reassuring, In addition to this slightly stiffer feel they have a signature brightness which contrasts well against the competition. If you haven’t already guessed I have a particular fondness for D’Addario strings as I made the change from Ernie Ball to D’Addario around 10 years ago and I haven’t looked back since. If you’ve always played Ernie Ball’s out of pure habit or association then you should give D’Addario’s a try. 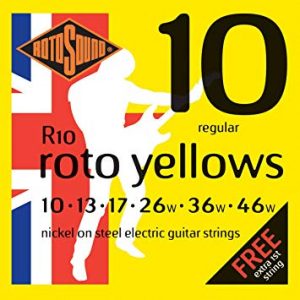 The only British string manufacture of any note or popularity is Rotosound, a classic string brand that rose to prominence in the 60’s British invasion period as Rotosound worked closely with bands such as Jimi Hendrix, Pink Floyd and The Who to develop a range of strings with the modern player (at the time) in mind. Rotosound have filled the 3rd place spot in the string guitar industry for years and are still very popular today and are comparatively cost effective compared to their competitors, plus Roto’s always come with a spare top E string (which is the string most prone to snapping) which has proven to be incredibly useful to Roto enthusiasts as Roto’s (like Ernie’s) tend to have a habit of breaking with constant use. The sound of Roto’s are similar to that of Ernie Ball’s but with a slight metallic tone which some players really like or adamantly dislike (depending on preference). The only tiny criticism that I have against Roto’s is the fact that they let go of their lion iconography and packaging design only to be replaced with something rather generic as the lion was a great contrast mascot to the Ernie Ball eagle. 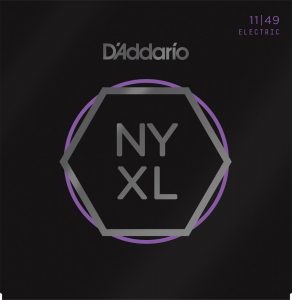 All string companies have more expensive or premium string types available on the market including various string coatings (Elixir Nanowebs) for increased longevity or different string formulas such as pure nickels, cobalt’s and stainless steel wound which have different tonal characteristics then a standard string range. Some of these variants are purely marketing but there are some notable exceptions that are genuinely innovative such as the NYXL range from D’Addario or the various coated string sets from Elixir. These types of strings are perfect for experimentation and discussion with fellow gear hounds but be prepared for the occasional miss for every hit that you make along your string journey.

Finding the right string for you can take awhile and it really is worth doing as anything that makes you feel more comfortable on your instrument is hugely liberating, plus experimenting with how you can alter your tone even subtly via strings is part of the evolution/identity process of being a guitarist. We are always tinkering with our gear and its surprising just how much of difference strings make to both your playing style and tone. Which are your favorites? Let me know in the comments below.